It’s a classic movie plot. A careless treasure hunter digs up an ancient power that should not have been disturbed. While the treasure hunter is sometimes innocent, more often than not he is a victim of his own arrogance or disrespect. From the Nazis in Indiana Jones who try to open the Ark of the Covenant to the pirates who stole the cursed Aztec gold in the first Pirates of the Caribbean movie, we accept that these villains deserve the terrible fate that befalls them. But what if it was not a ruthless gang of Nazis that dug up the Ark of the Covenant but a few hapless construction workers? How would they know that opening the curious golden box in the ancient temple would bring down the wrath of God?

In many of these films, the treasure hunters ignore numerous warnings written all over the tomb in hieroglyphics or ancient Hebrew; but for the hapless construction worker, these warnings would be meaningless scribbles. The blame shifts from the greedy treasure hunter to the shortsighted scribes who failed to recognize that their warnings would be unintelligible in a few hundred years. This is not just a problem with Hollywood screenwriting. 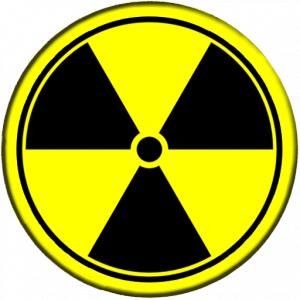 Julia Bryan-Wilson wrote a fascinating essay titled “Building a Marker of Nuclear Warning” for the book Monuments and Memory, Made and Unmade in which she explores this very issue. In 1999, a team of architects, anthropologists, linguists and scientists were asked by the government to create a warning sign that can endure for the next ten thousand years at the spot where the waste products of nuclear weapons manufacturing would be buried in New Mexico. The team quickly ran into issues. Creating a warning sign using current common languages, as was first proposed, would not work. As most of the anthropologists and linguists in the group pointed out, our modern languages will likely have evolved so much over a thousand years that a sign written in them would be virtually unintelligible to future generations. The strange geometric sign we use today to mark radioactivity is also unlikely to last ten millennia. The medic’s Red Cross might be mistaken for a crusading knight a few hundred years ago. Symbols are as transient as words.

Instead, the team needed to design something universal. Something that spoke to our unconscious fears that could be spread out over thousands of acres and last for millennia. One proposal was to create a field of spikes that would touch on our fear of being cut and pierced, and fill future visitors with trepidation. However, even the designer subconsciously knew that would never work. In his own sketch of the site, he showed people gathered around staring at the monumental spikes. The problem, Bryan-Wilson concludes, is that we humans are naturally curious. Anything monumental, even if ominous, will attract interest. Do archeologists not dig up the tombs of pharaohs, despite the curses inscribed on the walls? If the knowledge of radioactivity was lost over time, would our warnings, even if understood, be heeded? 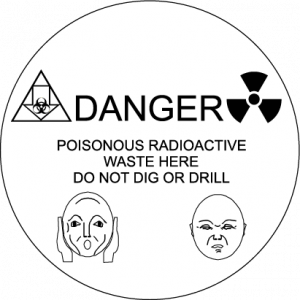 The committee was faced with a dilemma. How can a marker be both highly visible and anti-monumental? A marker that provides warning without provoking interest. They decided to spread crushed asphalt across the entire area to turn the desert into a natural parking lot. Its ugliness would be compounded with the heat it radiates. To provide further warning, jagged earthworks were constructed to create a confused and unappealing landscape and faces of people screaming and vomiting were carved into some of the rocks. The WIPP’s final idea might be better than building an imposing monument to our nuclear legacy or writing faded words in a long-forgotten language, but Bryan-Wilson has her doubts. Will our understanding of aesthetics and our nuclear legacy really last ten thousand years? Will an unusual landscape, even one designed to be as unappealing as possible not attract interest? Perhaps we shouldn’t judge those rash treasure hunters that broke into the pharaoh’s tomb. After all, it is only human to want to explore the unknown.