The consequences of climate change are real. It’s time to focus on the opportunities.

Last week, I found myself driving behind an early 1970s muscle car. It brought back memories: the gurgling sound of the V8 engine, the pea green metallic paint, Def Leppard on the radio, and the stink. Yes, it literally stunk—”roll up your windows and shut the vents” stunk. I then imagined the suffering one must have endured while sitting in a 1970s DC traffic jam.

In 1970, Richard Nixon signed the Clean Air Act (CAA) into law. This legislation, combined with a newly created EPA, provided federal oversight to deal with a growing national smog problem. Auto emissions were a major contributor. Fortunately, a young and optimistic General Motors chemical engineer named Dick Klimisch had an idea. He had been experimenting with the oxy-catalyst work first pioneered by French chemist Eugene Houdry. In his GM-funded laboratory, Klimisch discovered that combining a small amount of noble metals with some heat reduced automobile emissions by 98%. His catalytic converter actually increased gas mileage, but there was a hitch. The lead added to boost octane in crudely refined gasoline was fouling up his new device. If automakers were to comply with the standards set out in the CAA, the nation would need to move to unleaded gasoline.

Outrage and dire predictions came swiftly. Farmers claimed unleaded gasoline meant the death of their machines’ internal combustion engines; oil executives predicted a crude oil shortage due to the extra refining requirements of unleaded gas; and automakers lobbied against using the devices on trucks and heavy machinery. Many of these affected industries predicted the US economy would suffer under the CAA. But since its passage, the US economy has quadrupled in size. What did contract was the amount of lead, carbon monoxide, ozone and sulfur dioxide in our atmosphere. As always, the optimists won.

Imagine the outrage if we were attempting to give up leaded gasoline and add an expensive anti-pollution device to every car in America today. Even with our long history of overcoming environmental challenges, climate change seems insurmountable. We continue to argue the complexities of climate change through extreme political positions, instead of seeing the greater opportunity of making progress. As I write, parts of our country are on fire while other parts are under water. With months left in hurricane season, we’ve nearly exhausted the alphabet for named storm systems. We need to find common ground on the current pool of ideas addressing climate change. 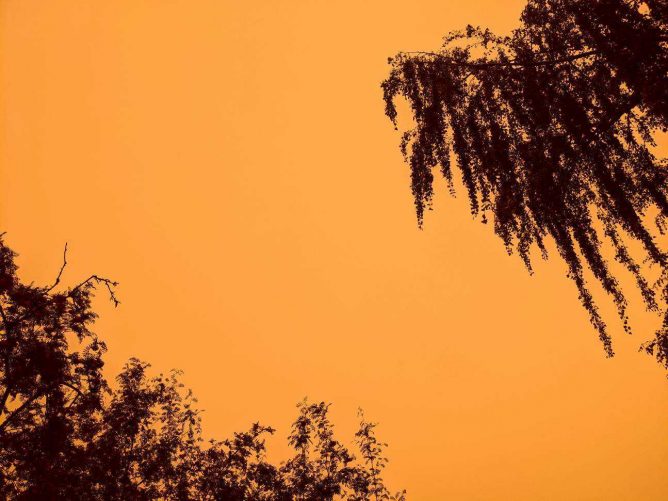 Not a pretty sunset, but a midday picture from one of our Portland-based software developers.

Plans like The Green New Deal, the Paris Agreement and the Kyoto Protocol have become ideological lightning rods. They should instead be viewed as a framework for a national discussion on the issue. As an optimist, I believe all change creates opportunity—even climate change. The ingenuity and creativity required to address this challenge can provide a significant lift to our economy, but only if we reach a consensus. Brilliant ideas like the catalytic converter don’t get invented without a collective acknowledgement of the problem. It’s time.